If you love Mimolette don't read this post. If you've never had Mimolette read this post, but remember that my posts are only one wench's opinion. Try this cheese. Try all cheese.

OK, I've gotten my disclaimer out of the way.

The background of this cheese is that in the 1600's the French minister forbade the import of foreign goods and so the French started making a French version of Edam. The bright orange of the cheese comes from our lovely friend annatto seed.

Mimolette is shaped a bit like a cantaloupe except instead of being completely round it has a flat part on top and bottom. It is said to have been the favorite cheese of Charles de Gaulle. Of course it was. I totally believe that in all of France, with all of the hundreds of cheeses to choose from, he would pick Mimolette. The blandest cheese in all the land.

According to all of the books I have, my belief that the cheese is boring puts me in the minority. People speak about the caramel, butterscotchy and deep flavors. Hu? Mimolette? Really? On the best of days, this cheese tastes like a orange cheddar. The rest of the time it's a bland, waxy, dare I say boring cheese.

The most interesting part of the Mimolette story is that this cheese is inhabited by cheese mites. Little microscopic critters that like to burrow their way through the rind and help the cheese to breathe. The mites which are microscopic look like dust on the cheese. Mitey dust.

Steven Jenkins' describes this cheese in the book Cheese Primer better than I ever could,
"Mimolette is one of the blandest cheeses you'll ever taste-though one particular aged version is passably tasty"

I love Steven Jenkins. Mimolette? Not so much. Pleh.

*This was a post that I was working on last night. I thought that the next time we opened up a Mimolette I'd take pictures and finish the post. Well, I went into work and we needed to open up a wheel, so lucky day, I have some photos to go along with the post. Thus proving in no scientific way that this post was meant to be.*

I will admit, that when freshly 'cracked' this cheese has a lovely aroma. Upon tasting it is good. It tastes like a good orange cheddar; milky, creamy, even a bit tart. Lovely. After a few minutes it becomes muted. Here's the thing, truthfully speaking, all cheese tastes ridiculously awesome when you first cut into them. After being open for a while, they all lose that initial 'kick'. Most of the cheeses in my experience don't go completely flat though. Mimolette goes flat in a big big way.

I hate to say anything bad about real cheese. It's not the cheese's fault. It is what it is and who am I to demand more from it? Birds gotta fly, fish gotta swim. Mimolette is what it is. Nothing more.

A whole wheel of Mimolette 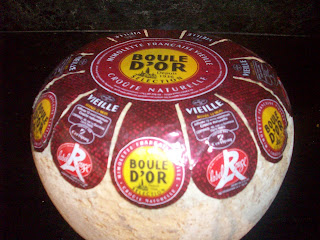 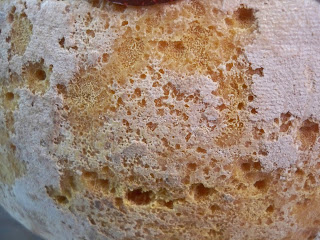 The paste of Mimolette is a deep orange. Very creamy and smooth. 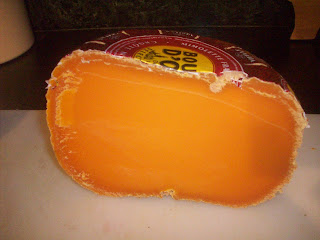 Your opinion is EXACTLY what keeps me coming back to your blog. Well, that and the fact that I'm from WI ... and we're all doomed through stereotype to LOVE cheese. :)

Am coming out of the dark to congratulate you on your inclusion in this week's FFF!

For those of you who don't know, FFF is Finest Foodies Friday. Every week the Foodie BlogRoll (you know, that little doo-da-day on the right hand side of my blog) pick 5 blogs that rock the house. Apparently this week, I'm among the 5.

Wow! I had no idea. I'm totally psyched! It means that people are actually reading the uncensored ramblings of a girl who likes cheese (A LOT).

Interesting. I LOOOVVEEE Mimolette cheese. I had it on a "Ronde du Fromage" whilst dining in Paris and fell in Love! It's so tangy/nutty/buttery/funky! I really like bleu cheese, so that's the type of "funky" I'm talking about. I found it about 2 months ago at one of those major wearhouse chains and coule NOT believe it. I bought it so my family could try it and they loved it. Ya got some I could buy? I live in Michigan!

Hello anonymous! Where in Michigan are you? Give me an area and I should be abel to give you a great starting point for your Mimolette search.

If nothing else, you should at least go to Zingerman's Creamery in Ann Arbor. They might have the cheese, but even if they don't it a wonderful place to go visit!

We've just had some 24 month old Mimolette that we got on the market in Nogent le Rotrou. *Now* I understand what the fuss is about. Slightly fudgy, granular, huge aroma in the mouth, gently melts, quite bitter aftertaste - this is great stuff.

Not quite as good as the best manchego I've ever had, but definitely a different creature from supermarket mimolette.

Very cool post on Mimolette!
I am a cheese girl as well and I agree that Mimolette does not deserve its fame. I have tasted other cheeses with mites that really had that "je ne sais quoi" that is missing in Mimolette..so it's not mites' fault!
BTW I am very surprised to find out that USA imports Mimolette and all its living guests (mites)..I mean..so much fuss to import few raw milk fresh cheeses and then you can get Mimolette..very curious hum
Best,
Dani

Hey Andrea-I'm happy to hear that you found some tasty Mimolette. I still have not. I've tried the 18 and 24 mo. I've had it in London, I've had it in Paris. Unless the wheel is just cracked it's "meh" at best for me.

Some of our customers absolutely love it which is good. Imagine how awfully boring the cheese case would be if we all liked the same cheese.

Good, clean food is not the problem. Huge corporations and factory farms who think that pasteurizing makes up for good sanitation are the problem.

I think that if our government actually knew what was going on in Mimolette that the aged stuff would be banned. You would only be able to get the stuff that comes in that waxy coating. *shudder*

If you truly want to taste the complex tastes in this cheese, you need to let it warm up to room temp for a day or 2. It is only then that you will get a taste of caramel or butterscotch.

Hey there anonymous-One of the great things about cheese is that there are so many cheeses out there. Everyone can find some for their own tastes. This is just not one of my favorite cheeses.

Tres vieille Mimolette (24 month mature) has an intense, salt caramel and beefy flavour, it has the same intense flavour whether just cut or not. Those of you that have the opinion that this cheese is bland and tasteless obviously do not have a good palate. You should try Cabrales from northern Spain, this cheese should awaken your taste buds!

I'm afraid we're going to have to agree to disagree. A fresh wheel of cheese-just cut- has a very different flavor profile from one that's been cut for a few weeks, a few days, or even a few hours. A well-trained palate can tell the difference.

Although tasty, I don't have the opportunity to eat Cabrales that often. When I do eat Spanish blues, I prefer Valdeon.