No, I didn't just sneeze. Bijou is a lovely goat's milk cheese from Vermont Butter & Cheese Co. in the Green Mountain State. True, they don't make nearly as much cheese as Wisconsin or California, but VT is tiny. If VT was as big as those other states they would surely give them a run for #1 cheese-making state. BTW, look out WI, CA is coming after you.

I want you all to know that this post is 100% biased. I love goat cheese, I love VT, I love anyone who promotes goat cheese through creating, marketing, or eating. Enter Allison Hooper. If goats were to form a religion it might be called Hooperism. I myself am proud to be a "Hooperette".

Allison Hooper is the co-founder of Vermont Butter & Cheese. She is the creator of the Vermont Cheese Council. She is the president of the ACS. She is also really really nice. * I could go on and on about Allison Hooper, but my celebrity babbling, are not interesting to you, so I'll just say this, Allison rules. Hardcore.

Back to the cheese. So, recently Martha Stewart said that Bijou was one of her favorite cheeses.** But what is it? Bijou is a small goat's milk cheese aged for a little over two months. Flavors here are slightly sour, a bit citrusy, a wee bit goatish and little bit of grassiness when young. As it ages it....ok listen I've got to be honest. I don't eat this cheese aged very often. It doesn't last in the shop usually, and it certainly doesn't last in my crisper. I like it young. Young and creamy and sour and spreadable and yum. As it ages it becomes harder and more "Crottinesque", an intense goaty, sharp, saltier cheese.

Bijou comes in a two pack. You can eat one now, and then age the other, or you can be like me and eat them both with a fresh loaf of bread. Patience is a virtue, but cheese is tasty now! 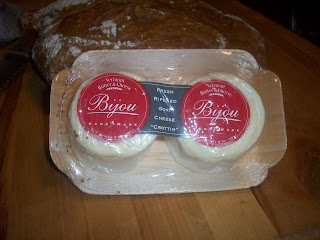 It's so creamy and is aged, yet retains its fresh goaty goodness. 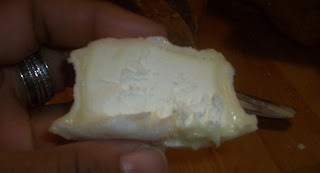 *To be honest, I haven't met Allison Hooper. I got all weirdly nervous last year and so I did say hi and she hi'd my back, but nothing more.

**When I picked up the Bijou from work I didn't know that Martha had given the official "good thing" thumbs up. I have been waiting for the Bonne Bouches to come into the shop. WAITING. STILL WAITING. In the interim I thought, well, a good Bijou is better than no VT cheese at all.
Posted by Cheesewench at 7:29 PM