Working with cheese everyday gives me the opportunity to care for it and to see how it ripens. The other day I picked up a Weybridge and was shocked! "Hey! Has anyone tried the Weybridge recently?" Everyone gathered round and we passed around the cheese. This cheese was incredibly difficult. Instead of being solid, it felt like...well, kind of like creme Anglaise stuck in a cheese.

I opened the wrapper to take a good hard look at the cheese. No ammonia smell, no funny molds that shouldn't be there, not wet, the cheese looked good. So I took one home. I was pretty sure that there was still going to be some kind of solid in there, but probably not enough to make slices like I did before.

I decided to cut the top off of the cheese. Similar to how you'd work with an Epoisses. The rind is no longer a white, it's gotten a beige, mottled tint to it. The flavors are a bit different as well. Instead of a walk in the woods after a rainstorm, it's become decidedly more barnyardy. Straw, musk, and animal husbandry are all coming into play now. Really exciting to see a young cheese and get to compare it to an aged version of the same cheese. 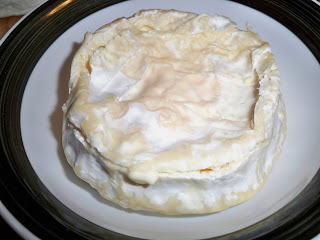 This cheese is obscene. 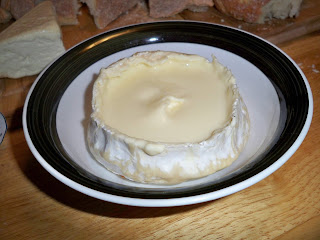 Ultimately, this cheese doesn't have much more to give us. It's just about reached the end of it's lifespan. I think that after tomorrow I would not eat this cheese. I think it's going to go into ammonia-bitter-yuck land soon. But man oh man that makes some good "fondue".

We couldn't stop laughing at how gooey this cheese was. I don't know why. We hadn't even opened the wine yet.

That is definitely one very ripe cheese... Wow... would it normally be sold like that? I guess I would have probably tried to cut it the regular one and it would have gone all over the place!

Different cheese wants to do different things. An Epoisses wants to be a soupy gooey mess. When it's optimum is when it's at a fondue consistency. Admittidly this cheese was past it's "perfect age".

Part of being a good cheesemonger is
knowing cheese at different stages of it's life. I was very intrigued by what I knew the paste would be and wanted to try it.

I did sell a few of these to some of my customers. I didn't offer it to everyone though. We have quite a few regulars who I know well enough to say "here try this gooey creamy cheese". I also gave one to a customer who had recently purchased the same cheese when it was younger.

The key is developing a relationship with your cheesemonger. Just as ou have one with your butcher or grocer. Trust us. We won't lead you astray.