I always knew it would come to this. That I would do a post on Roquefort. with all the big doings here in the States, how could I not?

Of course this cheese has a lovely story behind it. Rumour has it that a shepherd was tending his sheep over 2000 years ago, and wanted a shady and cool spot for his lunch so he put it in the caves. He then had to attend to his flock as there were some wolf shenanigans afoot. In the process of rescuing his sheep (and one can assume getting a new wolf pelt for the cold nights) he forgot about his lunch. Until three months later. The fruit and bread he'd left in the cave were moldy and inedible. But the cheese. It had these veins of blue and a nutty aroma. Being an adventurous man, he thought he would try it and lo and behold a new cheese was born.

While that story might be a bit fanciful, many do consider this to be the oldest cheese on record. This cheese can be dated back to the first century B.C.. Roquefort was the first cheese to get an A.O.C. designation back in 1925. The regulations for this cheese are very specific.
Although it ages in the caves and the molds must come from that source, the mold Penicillium Roquefortii is also added to the curds.

The cheese has a creamy ivory paste with veins that start out greenish and change into a bluish grey as it matures. The flavors are nuttiness, milky, salty, and a bit peppery. I have read that some people consider this to be a mild cheese. I don't think so. This is a huge cheese. Full complex flavors, and one of the biggest blues I know.

Many blue cheeses are wrapped in foil to help contain the moisture level of the cheese. Once you get it home, you should wrap it in wax paper and then in cling film. 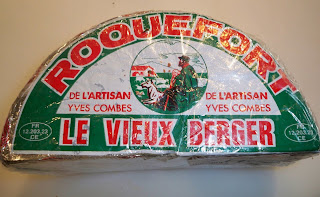 If it doesn't have this "stamp of approval" it's not Roquefort, but instead a cheap bastard impersonator. 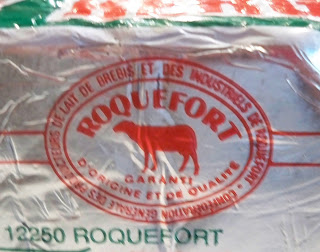 I've got to admit it, this cheese is gorgeous 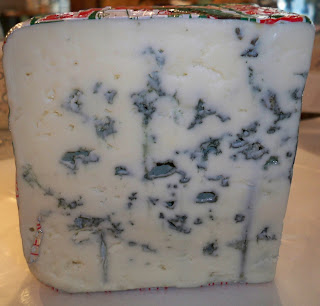 I have a bit of a confession to make. Actually, two. First confession is, I am allergic to blue cheese. If I eat too much of it I start to get hives on my arms, and get a bit itchy. That has never stopped me from trying blue cheeses, and in fact blues are some of my favorite cheeses around. The second confession is this, I don't like Roquefort. I am not proud of this. I know that it's a wonderful cheese. I know about it's got a lovely romantic history. Being a lover of drama and cheese I should love this guy. I just can't. I apologize to all the sheep who give of their milk and all the shepherds who make what truly is one of the great cheeses of the world. I'm so sorry.
Posted by Cheesewench at 10:03 PM

You're so good to admit you're not a fan of the roquefort.

It really is a lovely cheese, but I find it a bit "strong" for my taste as well. Love all sorts of bleus... but Roquefort I have to warm up to a little bit :)

Thanks for the comment Frugal. Always nice to hear from a reader.

I try to be honest in what I write. Most of the cheeses that I have met, I love, but every once in a while...

One of the things we do at the shop is speak about cheese and wine critically, not personally. Critically this is a wonderful cheese. Complex, historical, well crafted, rich in tradition and pairs well with a Zin.

Maybe Frugal wants to you to substitute Roquefort for American cheese. Otherwise I don't understand her post.
Nevermind. It just doesn't make sense.

Although I have my own opinions about cheese, this is ultimately a place for me to share my love of cheese with others.

While I do sometimes get...excited about a topic, this is a safe place to learn about cheesey goodness. We build up, we don't tear down.

I thought about deleting the previous comment, but I'm not that into censorship. No one needs my approval before they comment on this blog, and that's how I'd like to keep it.

This is at the center of it all, a blog about cheese love. Be nice.