As you know I recently entered the Oregon Bounty contest for a cheese and chocolate cuisinternship. If you haven't seen the video, given me a bunch of stars for being awesome and written a comment, you should do so.So did quite a few other people. I was looking at everyone's video and came across one that made me angry. In this video the applicant talks about how when people think of good cheese they don't think of California.

I was shocked and appalled.

Of course people think of California when they think of cheese. Yes, Cali, like Wisconsin has a lot of good commodity cheese, but there are also some really good artisan producers as well. I mean come on guy, Red Hawk from Cowgirl Creamery (CA) won second place in the all around competition at this years ACS.

My response to this man is to do a few posts about cheese from CA. Today I'm starting off with Truffle Tremor from Cypress Grove Chevre in the NW part of the state.

Truffle Tremor won the golden Sofi (think of it like a food Oscar) at the summer Fancy Food Show in the Cheese/Dairy product category. This is a soft-ripened goat milk cheese studded with truffle bits. It has a tangy, goaty flavor that then mellows into an earthy mushroomy tasty morsel.

Eaten straight on a cheese board it's good, but it can be a bit overwhelming for my mouth. I prefer to cook with it. My plan was to use it in risotto for dinner, but this morning when I woke up I had eggs on the brain, so into an omelette it went. When melted this cheese turns into a delightfully silky smooth luxuriously saucy feeling on your tongue. 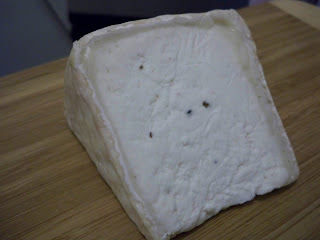 When the eggs are just starting to coagulate, add a little bit of cheese. A little goes a long whey I know it's a bad pun. I think this is about 1T of chevre for two eggs. 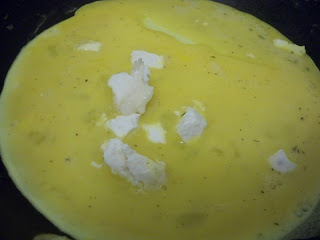 Okay, so you guys don't care that I made an awesome omelette without any color, but this was part of one of my practical exams at NECI years and years ago and I'm super excited that I can still rock it! 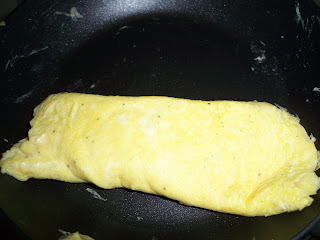 I ate breakfast in about 4 minutes today. Soooo good. 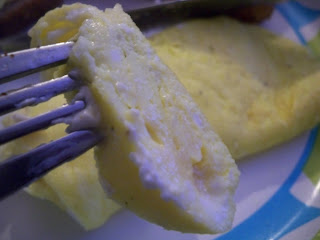 By the by, Mary Keehn is one of the women who helped bring goat cheese into the forefront of the American cheese board. She was also named Small Business Person of the Year. No good cheese in California? If I had the opportunity to do so, I would take off my glove and challenge the man who said that to a duel!

It can be hard to find artisan cheese from CA here in Chicago, but I'm going to do my best to showcase some tasty treats over the next few posts.

There is a great company called Bellwether Farms from CA and they got a great write up in Saveur. It is very very hard to get their cheese out here, but I will do my best.

If you're in Chicago and planning on going to the Chicago Gourmet festival I'll be working a cheese tent for work on Sunday morning. Stop by and say "hi".
Posted by Cheesewench at 5:03 PM