I apologize if you've read this before. Today (9/9) I was deleting all of the drafts , and I deleted it like a moron/tool/stupid/technologically inept/stupid-head. Gone. I can't tell you the stress, panic, and fear I had at something I'd worked on for so long being gone. I've found it, and am posting it again, but I did lose comments. Sorry guys.

Jasper Hill Farm is one of my favorite businesses in the cheese world. Yes of course, they make phenomenal cheese but it's more than that. It's all about the cellars. Years ago they had a choice. Take Cabot up on their offer to collaborate, or stay small and independent. Some would say that they are still an independent company, and yes, on the surface they are, but they are partially dependent on Cabot to maintain and propel their growth so I don't know if that's independent really.

A lot of cheesemakers would and did say no when Cabot came knocking on their doors. JHF was not the first farm that Cabot approached. JHF was the only one who said yes. Now, because of that collaboration JHF has one of the most innovative aging facilities in the country.

How is the partnership with JHF and Cabot beneficial? For one, having seven vaults with 5600 wheels of Cabot in each vault means that you've got a financial portfolio that banks like. You can be a great cheesemaker with phenomenal product, but in order to get it out into the cheese buying public you need financial support. This largess allows the folks at JHF to help other cheesemakers in the state.

How do they help? To answer that you have to know the difference between aging and affinage. A lot of people use the word affinage, but are really not doing it. Aging is taking a cheese putting it in your warehouse for 'x' number of days, months or years and then selling it. Affinage is so much more.

If left to it's own devices, cheese will do what it wants to do. Affinage is trying to convince the cheese to do what you want it to do. Affinage is turning the wheels, brushing them, washing them, brining them, rotating and working with that cheese during every stage of it's age, using techniques to make it better, not just relying on the passing seasons to do the job for you. Affinage is recognizing that being a cheesemaker isn't just about making a cheese.

Since they are keeping such a close eye on the cheese, if a wheel isn't acting the way it should the folks at JHF can look at everything and every hand that has touched that wheel, they can call up the cheesemaker and ask them questions, or as Mateo related one story, they can go out and do water samples to see if the brine solution has a different component because of something in the water-which it did.

The folks at JHF are not just great cheesemakers, but they are excellent affineurs and through their hard work and dedication are helping other cheesemakers in the region to make better product, and get a bigger audience for their cheese. For a small state like Vermont I think this is incredibly important. Vermont has all sorts of wonderful cheeses, not just Cheddar. Getting those cheeses out of the state and into more mouths has to happen if the VT artisan cheese movement is to progress.

Take Hartwell for example. Ploughgate Creamery is a very small company. They make a few kinds of cheese and have only been making their cheeses for a little over a year. Normally this is a cheese that would just be local. With JHF behind them they are able to age more wheels, and get a wider distribution than if they were just going it alone.

The folks at Jasper Hill Farm are continually working on ways to improve and progress. Coming up with easier ways to read stat sheets, bringing in a robot to turn the cheeses for them some pros and cons to this but that's for another time or changing cheese formats to get better results for the cheesemaker. Is Jasper Hill Farm and the Cellars at Jasper Hill the American version of Neal's Yard Dairy? Only time will tell, but I think they're well on their way.

Periodically while driving through the most beautiful state in the union a sign will appear indicating a "scenic view". In my opinion this is redundant, and I rarely stop. I mean after all, almost the entire state qualifies as scenic. This particular time my brother and I stopped. Seriously scenic. 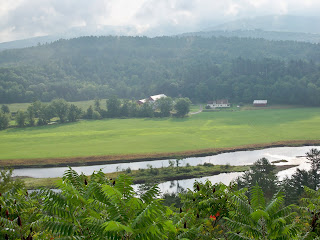 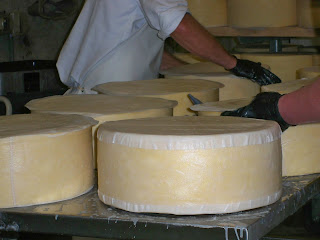 In the caves all the cheese is put onto wheeled speed racks that are rolled in and out of grooves similar to railroad tracks. Very efficient. 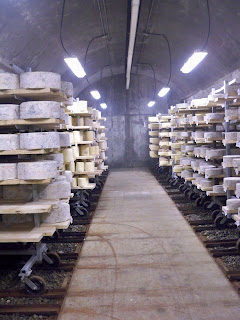 Mateo is certainly a rock star in the cheese world. My brother took the tour with me and afterwards we were pondering exactly which rock star Mateo is. At first my brother suggested Frampton. I strongly opposed the comparison. After a debate that lasted the entire trip back to home base we came to a consensus. Mateo is David Bowie. 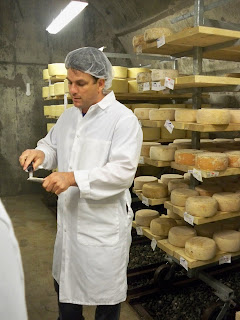 Weybridge. I've written of this gorgeous, luscious cheese that tastes like Vermont and happiness. Apparently they're changing their format. As long as the taste is the same they can do whatever shape they want to. 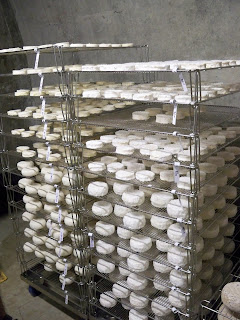 View from Jasper Hill. Didn't I tell you that Vermont is gorgeous? 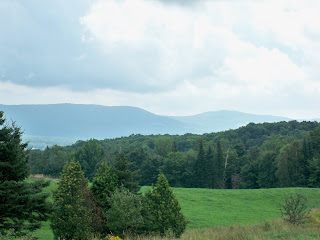 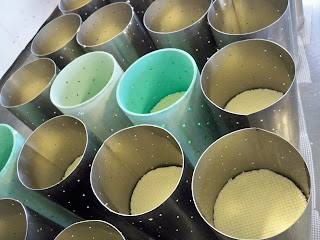 The newly formed wheels of BHB are sitting in their molds on the table. High tech bucketry catches all the whey as it drains. 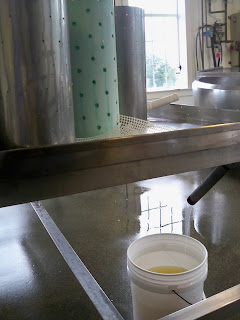 Bayley Hazen Blue has a natural rind. In order for this rind to occur evenly the wheels must be smoothed out. Otherwise the rind would find all of those lovely nooks and crannies and start developing inside the cheese instead of outside. 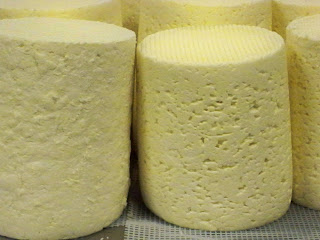 Rack upon rack of Constant Bliss. 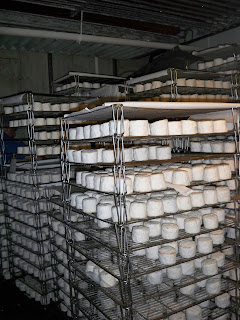 Right outside of the Constant Bliss aging room was a question. The answer to your question is yes. Yes it does.


This post has been kicking my butt for the past few weeks. Every time I sat down to it I would get all jumbled up in my head as to what I wanted to say. Unfortunately, I'm also insanely neurotic and so rather than go and talk about the fantastic cheeses I ate, I would worry about this post. Then I discovered the show Dexter on DVD. Whenever I got stuck on something I would put in some Dexter and pop open a Coke Zero. I'm now in season two of Dexter. Finally, after a ridiculous amount of tv on DVD, I've got my Jasper Hill Post down.

One of the things I'm goign to try to do in the future is to not get hung up on a post. If it happens, it happens, if it doesn't, I'll just move on to something else. Putting so much pressure on myself for a post just doesn't make sense. In addition to making me cranky, it also means that instead of a post, you get a week or more of silence. Sorry about that. I'll try not to do it again.