One of the best parts of my cheese vacations is when I get to come back with a cooler full of cheese. Going back to VT for the cheesemaker's festival was one of my favorites, because I got to come home with some of my favorite cheeses and I got to make some new cheese friends.

Today is all about the three little cheeses. The little round white one is Crottina from Blue Ledge Farm. the white square is from Willow Farm and her name is Alderbrook. Finally, the big orange mama up front is from Dancing Cow and her name is Sarabande. 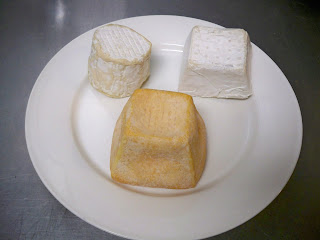 Sarabande. I've never had this cheese before although I have had others from Dancing Cow. One of my favorites is the Bouree which spends some time in the JHF cellars. I was very eager to try this stinky pyramid of goodness.

Raw cow's milk cheese it is stinky on the outside and luscious, creamy, sweet like caramel, smokey, buttery, and is frickin' fantastic! It had quite a hoof on it, but I didn't care. We ate it up. Sooo good. 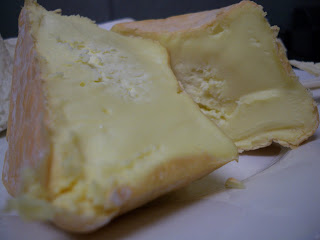 Why Willow Hill Farm? Why?! Usually all of their cheeses are delicious. I've had Alderbrook before. My memory tells me that it was buttery creamy, a bit grassy and had that wonderful fatty mouth feel that sheep milk cheeses tend to have. Unfortunately the piece I had didn't taste like that. The paste was...ok-ish, but the rind! It tasted like soap!

Was this an off batch? Had the cheese turned? Had the people behind the cheese counter ignored it for too long? Who knows. If I'd been back in VT I would have gone back to the Co-Op I'd bought it from and return it. Since I was in Chicago I had to throw it out. 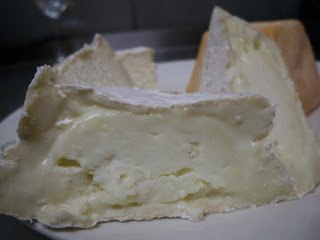 Crottina. This was hands down my favorite cheese. I've never had a bad cheese from Blue Ledge Farm, and the Crottina is another one of their outstanding goat cheeses. Creamy, slightly sweet, a little bit of that green vegetal-grassiness that all VT cheeses have with a nice fudgy texture. 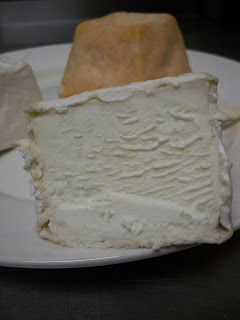 I have a few more cheeses from VT to talk about for next time. Right now I'm looking for some new cheeses to bring into the house. I'm thinking blue.

BTW guys, there are only a few days left to enter the Oregon Cuisinternship contest. I've got a few ideas for my video, and I'm doing it on Sunday. In an act of maybe foolishness I'm going to post the video on this blog for you all to see. I am a complete dweeb on film, but I'm okay with that if it means I get to make cheese at Rogue Creamery.
.
Posted by Cheesewench at 6:12 AM

Just found your blog. I love cheese, and am always trying to find new things to do with it...Will be checking back often

Thanks Dave! Hope I can make cheese come alive for you!