There were four little cheeses. The dark green is a little button from Lazy Lady Farm. Underneath that is the Four Corners Caerphilly from Cobb Hill Cheese. On the bottom left is Dorset from Consider Bardwell Farm. Closing out our game of four square is Organic Champlain Triple from Champlain Valley Creamery. 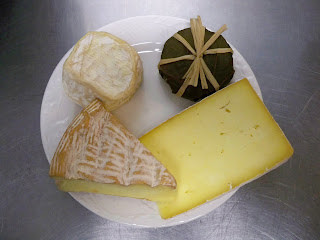 The cheese on the left is the Dorset from Consider Bardwell Farm it's a washed rind, buttery, creamy, sweetly grassy, stinky lovely cheese. Congrats go to CBF for their third place win for their cheese Rupert. Luxuriously smooth mouth feel. 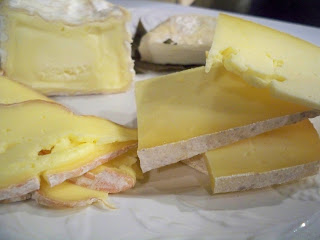 On the right of the above photo we have the Four Corners Caerphilly from Cobb Hill Cheese. They make one of my favorite cheeses ever, Ascutney Mountain. They do a very good job of honoring the Welsh cheese Caerphilly. It's crumbly, salty, assertive and tangy on the tongue, leaving the tip of your tongue just a bit numb. I like putting it into a grilled cheese with a more mellow companion like Asiago Fresco or instead of a button of goat cheese, shave some of this onto your salad. For this wedge, my friends and I added a wee bit of honey. Delish!

I bought this at one of the co-ops in town and it was listed as a cow/goat blend button from Lazy Lady Farm. Anytime I see something from Lazy Lady Farm I am inclined to buy it, Laini makes such good cheese. This cheese was a bit hard to eat however. The cheese, or the leaves had been soaked in either too much alcohol, or the cheese had been aging in the leaves too long. There was a sensation of eating an alcoholic dairy product, but not much on the cheese itself. 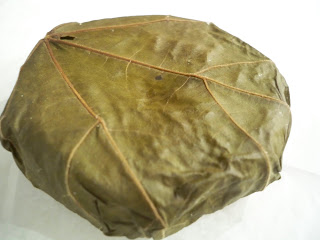 It's like a little flower of cheese. Very similar in looks to the French Banon but about half the size. That cheese is a raw goat cheese that is aged for a few weeks, then dipped in fruit brandy and wrapped in chestnut leaves. I would imagine this little button cheese would be very good in something like a salad, or flan, but on it's own I didn't think it was very well balanced. That being said, the next time I'm in VT, or NYC I'm still going to buy Lazy Lady cheese. She is always coming up with new cheeses, tweaking recipes and forever finding inspiration. I love trying out her new additions. 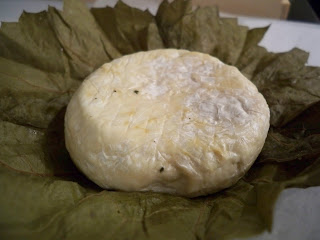 Last one up, was the most surprising for me.
Organic Champlain Triple from Champlain Valley Creamery was sooooo good. You all know that I'm not a big triple fan, but this was different. I mentioned to a friend that it was like having a rockit compound butter on top of mushrooms. Rich and creamy with a slight peppery bitterness and an earthy quality to it, for a brief moment in time I forgot about my prejudice against the triples and found happiness in this cheese. 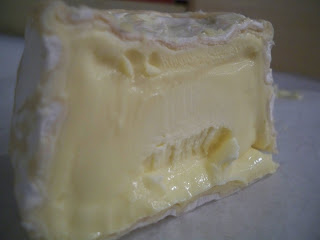 That's it for Vermont for now. I finished my entry for the Oregon cuisinternship contest, but haven't decided if I'm going to post the video. The words have not been invented yet to describe the supreme dorkiness that is me on a video tape.
Posted by Cheesewench at 9:43 AM

post the tape...it's the internet, we are all dorks. I love your blog, and dream of cheese when i visit

You are awesome - very funny and a good writer. I just stumbled on this blog and think it's great.

Cheese! God what an amazing food. I love it! This looks fabulous. I could eat cheese all day, everyday.

AYOTG: Thanks for your encouraging words. If the second video turns out better than the first I'll post it.

Velva: I love working in a cheese shop and doing cheese vacations! So much fun!

Anonymous: Thanks for the kudos!

OK -- those cheeses are TOTALLY gorgeous. And, if your descriptions weren't enough, I'd eat them just for the look of them. That's art, I tell you.

Thanks Lo, hope you enjoy the video!