I got an email from someone asking me if I thought that Carr Valley Cheese Co. was an artisan cheesemaker. I hesitated in writing back because I have very strong feelings about CVCCo. Hopefully I will be able to write this from a critical point of view and not an emotional one. Before I even start to get into this post I'm going to do a bit of a disclaimer:
I'm going to grab a glass of water and get started.
The short answer to the question is no. No, I don't think that Carr Valley Cheese Co. is an artisan producer. Why? Well, it's their products*. Look at the website and see if you can find the several things that make me sad. Or instead of exploring the site you can cheat and look here**. I found this gem while in the section "aged or selected by owner Sid Cook". That means that Sid Cook himself, a Master Cheesemaker has himself selected and makes a processed cheese and cocoa product. That is not an artisan product, nor is it made by an artisan producer. What it is is an abomination. It makes me sad, and looking at it literally turns my stomach.
I know what you're thinking, if Sid Cook is a master cheesemaker, how could he do something so clearly against the standards and principals or artisan products? My answer to you is I don't know. I do know that to me, being a master cheesemaker doesn't mean that much and part of the reason is because of this product. In addition, being a master cheesemaker does NOT mean you're an artisan cheesemaker.

"Today, fourth-generation owner Sid Cook is one of a small handful of certified Master Cheesemakers in the United States. It's a distinction awarded only to veteran Wisconsin craftsmen who complete a rigorous 15-year advanced training and education program."

I do not understand how not living in Wisconsin means you can't be a Certified Master Cheesemaker. It appears to be an award created for the promotion of Wisconsin cheese, by the interested Wisconsin parties, and has very little to do with cheesemakers themselves.***
The culinary world has a designation for chefs called "Certified Master Chef". Anyone in the country is able to take this test, and if they pass they can go back to work with a CMC embroidered on their chef coat. It bothers me that Wisconsin promotes it's cheesemakers with an assignation that no one outside of the state can get or govern. Tricksy.
Back to the subject at hand. Is Carr Valley Cheese Co. an artisan producer? No. Calling a few products artisan in your line of over 70 different cheese does not make you an artisan producer. Making a rolled log of processed American cheese with cocoa and calling it chocolate cheese does not help your cause.
There are a few cheeses**** from Carr Valley that I enjoy, but artisan? No. No. No. NO! That being said, you do not have to be an artisan cheesemaker to make good cheese. There are plenty of commodity/industrial/specialty cheeses that make for a good snacking/cooking/baking experience. I will do my best to start showcasing some of them in the future.
*I really do enjoy the Billy Blue from Carr Valley Cheese Co. There's something about goaty blue sharpness that makes me happy on three levels.
**For a delicious chocolate cheese, look to Indiana. Judy makes a bourbon chocolate torta that I find to be a bit too strong when eaten alone, but is phenomenal in baked goods. I also have a recipe for a cheesecake I made with it.
***One of the sidebars on my blog has a small list of some of the cheesemakers that I love. I have over 50 names on that list. The majority of them will never be Certified Master Cheesemakers, not based on a lack of experience, but because they don't live in Wisconsin.
****I don't want to be snarky, but I have to tell you a little story. This summer at the ACS festival of cheese I was walking around talking into my little recorder to give myself reminders of what I'd tasted. I saw one of CVCCo.'s cheeses sitting there. It was called Sweet Vanilla Cardona. The memo I left myself goes as follows "Sweet Vanilla Cardona from CVCCo. Tastes like it was brined in table sugar and has an addition of artificial vanilla flavoring. Never put this in your mouth again". Even with that being said, I still try every cheese I come across and will probably try that one again. Every wheel is different, maybe the cheesemaker changed the recipe, or my tastes have changed. As a child I hated "stinky cheese" but look at me now!

Most of the time when I post I'm telling you guys about some fabulous cheese that I absolutely adore and love and how you should try it because only then will you reach cheese nirvana. Today is different. Sometimes bad things happen to good cheese.

Every once in a while we get a flawed cheese. Most of the cheeses we carry are made by hand, and sometimes human hands mess up. The other day I opened a wheel of cheese from an artisan producer in Vermont and this is what I saw. 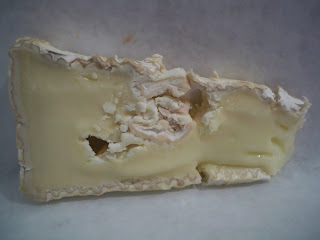 Eww right? Well, kind of. Somehow when the cheese was being formed something went awry. It looks like there was an air pocket in the curds, so when the rind was forming it found the air pocket and started to develop into the paste of the cheese. Everyone else at work thought it was gross, but not me. I got a knife in there, dug out some of the excess rind and tasted it and the cheese just to make sure the paste wasn't affected. It wasn't.

I know it's a flaw. I know that no one, cheesemaker or cheesemonger want this to happen, but for me there is something kind of beautiful about this. It reminds me that cheese is a finicky, delicate thing with a mind of it's own and that even the most skilled and experienced cheesemaker is still a human being and has imperfections. It reminds me to appreciate the thousands of gorgeously formed cheese wheels that come into the shop every day and the skill it took to get them that way. Honestly though, isn't it kind of neat?
Posted by Cheesewench at 6:36 AM 2 comments

I have been looking forward to Jeanne's cheese festival for Wisconsin Originals since I got my tickets months ago. I've already planned out the cheesemakers I wanted to pester talk to and was going to try to wriggle my way into farm visits. Unfortunately a family member back on in NYC has become very ill, so instead of a cheese festival this weekend I spent a lot of time in a hospital. There's no better place to hear about the festival than from Jeanne herself, so take a gander at her blog and see how it all went down this weekend.

As I mentioned I have recently been promoted to assistant buyer at work. One of the perks is that I get to do cheese tastings. Yesterday we did a tasting of 28 cheeses and 2 butters.

I love tasting cheese, but I have a favor to ask of cheesemakers/distributors, send good product. Dont' send us the stuff that's been sitting in the fridge for months, vaccuum-packed in plastic, or "aged" almost beyond recognition. We can only judge your on the product you sent us, and if it's crappy, there's no way we're going to buy it.

Out of the 28 cheeses we tried there were maybe five of them that were deemed acceptable. Will we actually end up getting them in? I'm not sure. I do know that it was rad getting to taste all these fun cheeses.

So for part of dinner tonight we had a few cheeses laid out. Three were from the tasting and two were just some "everyday" cheeses.

My favorite from the tasting and a cheese I've had in the past was the Camilla. A soft-ripened goat cheese that has qualities of a Robiola or LaTur, but is so much more. Creamy, tangy and a bit grassy this cheese has an unexpected and moan-inducing aroma and flavor of honey and flowers. When the 4 of us were sitting around the table my girlfriend asked me "what are they feeding these goats?" I can only imagine that these goats are nibbling on some sweet grasses and flora. So good. I ate 1/4 of the wheel for my dinner tonight. 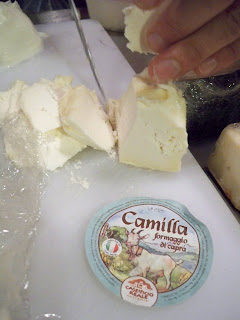 So, starting on the right with Camilla, the cheese underneath it is the Cabot Private Stock Cheddar. The cheese is aged for 16 months and is quite tasty. It's acidic, and dense without being heavy or greasy. I love a sharp Cheddar, and this block cheese from Vermont hits the spot.

Next up is the Baby Swiss from Boggy Meadow Farm in Walpole, NH. I found this cheese when I was in the supermarket in NYC and was floored. I just didn't expect to find cheese from a small producer in the Stop & Shop. Pleasantly surprised by this little cheese full of acid, salt, grass,and robustness.

The one with the natural rind is called Salva Cremasco from northern Italy. It's a soft-ripened cheese with a semi-soft paste. It reminded me of a Ricotta Salata with it's salty, crumbly paste but with the rind giving off a little bit of an earthy, stone flavor.

Last up is the Pecorino Calabrese Reserve. A nice sharp, nutty, sheepy and gamey cheese. You get a full, round mouth feel from the sheep's milk cheese, but without the greasiness that some Pecorinos can impart. 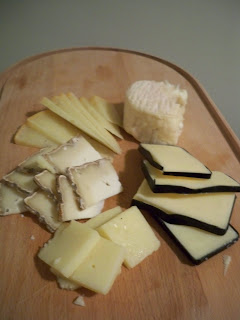 Next up, the ACS, and why you should care
Posted by Cheesewench at 10:34 PM 1 comments