There is a man I know. He's a good man. A bread-baking man. A macaroni and cheese loving man. A stinky cheese fan. One of his favorite cheese concoctions is Limburger with raw onions on toasted bread that has been spread with butter.

In the effort to understand what makes Pa so enamored of this stinky beast I purchased some Limburger a few days ago. It has taken me this long to be able to write about it without reliving the experience olfactorily yes I know it's not a "real word"

This Limburger is from the Chalet Cheese Cooperative in Monroe, WI. Besides being a ridiculously stinky cheese, it is also a time-consuming one. On page 45 of the book "The Master Cheesemakers of Wisconsin" thank you Santa Myron Olson-a master of Limburger says

Such a hands on intensive process for a cheese that is ridiculed and hated more than any other cheese I can think of can only mean that the folks at the Chalet Cheese Cooperative have a passion for it. Since they are the only true makers of this cheese in the U.S.A. I decided that if I was going to go Limburger I'd go authentic.

The cheese has various stages of funk. In it's infancy the cheese is rather crumbly and feta-esque. As a teen a bit of earthy flavors come in. As an adult this is a big, agressive, stinky, hair-curling barnyardy funk bomb. I went with the mature cheese.


The cheese we tried was only 2 months 3 days away from the code date. There is a promise of a stink once opened. 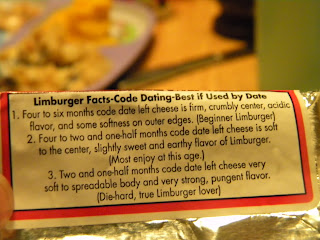 I tried to entice my sister-in-law to get up close to it and take a whiff. She claimed that she could smell it from where she was. I followed her with cheese on a plate taunting her like a 6 year old. 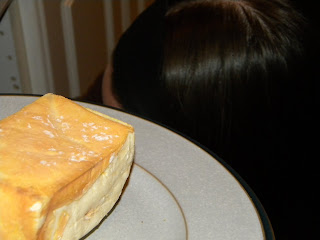 Remember the show Miami Vice? Crocket and Tubbs never wore socks with their leather loafers, even in the sweltering summers of Miami. Imagine what odors would assault them when they took off their shoes after a hard day of drug lord busting. Now add with that a barn that hasn't been cleaned out quite yet and top it off with sour milk.

So yes, this cheese stinks. It stinks big. It smells even stronger than I'd anticipated. I cut a slice and took a bite. Here's a tip for you. When you bring the cheese up to your nose, start breathing through your mouth. The first time I went to take a bite my nose revolted and caused an abrupt halt to my movement.

Finally I popped the cheese in my mouth. WOW! The flavor profile isn't as stinky, but it is a funky cheese. Flavors of sour milk, dried hay, barn and a bitter bitter rind. Even as I sat there thinking of how I was clearly going to be defeated by this cheese, I started coming up with other ways I might eat it. Obviously I'm going to have to try it when it's a bit younger to get a clear sense of all that this cheese can offer. I also think that applying heat to it might bring out more of the milky flavors, and maybe even more pasture floral notes. Unfortunately I am not ready to do that. I'm going to have to wait a while for the apartment to air out before I bring "the Beast" back into the house. 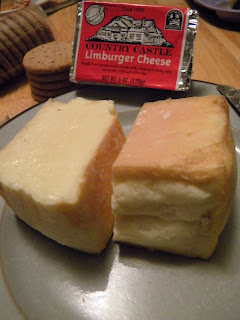 I love cheese. I love my friends and family and they love me. I force encourage my loved ones to try cheese. All the cheese. From the mild Fromage D'Affinois to the insanely stinky Fromage D'O' Cow and Limburger. Cheese after cheese after cheese. Cheeses that should be eaten right away. Cheeses that should have been eaten two weeks ago. They all suffer for it and I am ridiculously grateful for their love and strong constitutions.
Posted by Cheesewench at 8:03 AM

Your family is very lucky to have you as a member.
Even the most foot-smelling cheese in the world is worth tasting - at least once.

My father loved stinky cheese and onion sandwich as well... wonder if it is a generational thing

Stinky cheese is my thing (I have been chasing the elusive Stinking Bishop for a year) but I have not gotten up the nerve to taste Limburger. After reading this, I think I may take the cheese-plunge!

I have added your blog to my blogroll, was hoping you may add mine to yours.

Ah, yes. The beauty of limberger... my entree into the world of cheese. So stinky, and yet so good.

Happy 2010, my fine cheesewench! Looking forward to another year with you.

Thank you for posting this! I think the first hand experience will encourage those who might have held back till now to take the plunge.

Please keep in touch! We will be launching our own blog soon and would love to keep connected!

I purchased the same cheese after I watched Bizarre Foods-Wisconsin with my father. Out of the 12 people at his house that day, only 4 actually tried it and only one swallowed it. I love cheese but sweet Lord, it was awful!