Earlier this month a few co-workers and I went to Madison, WI for the World Cheese Championship Contest. The contest is held every year, although Madison is host only every other.

The first stop was to Quince & Apple where I got a chance to meet with Matt and Clare. This husband and wife super-duo make some of the tastiest preserves on the shelves of any store, and are winners of my highly coveted and completely made up "Holy Moly This Stuff Is Fantastic!" award for best orange marmalade I've ever had. Seriously.

When they say that they make small-batch preserves they're not kidding. Two burners and a camp stove. That's what they've got for cooking all their lovely preserves. During the Christmas season the two of them were making do with just two camp stoves. M & C of Q & A use local and seasonal ingredients whenever possible. They also have a wonderful creativity that goes into their flavor combinations, I mean who else do you know combining fig and black tea? They are friendly kind people who make exceptional product and I'm really glad I got a chance to meet them both.

Luckily our hotel was on the same block as Fromagination. Owner Ken and his crew do a great job of showcasing local fare such as delicious cranberry relish by Quince & Apple, and carrot graham crackers which taste like carrot cake in cracker form- minus the frosting -from Potter's. I ended up with some Q&A pear, honey ginger spread, volume 4 of cheese slices and some delicious Cheddar from Bleu Mont Dairy.

Madison is a very beautiful town. We spent some time walking around the city and spent some times just hanging out on the capital steps. It was a beautiful warm sunny spring day and for a brief moment I felt like I was on vacation. If I were to leave Chicago but stay in the Midwest I would surely try to find a place to live in Madison. For some reason it kind of reminds me of Vermont.

I love the Capital building on the square in Madison. Absolutely beautiful. 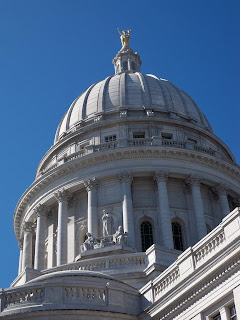 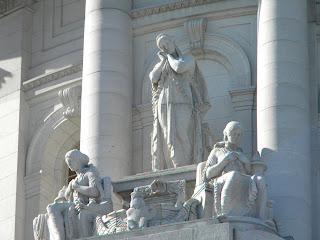 Moments after walking into the capital building we were asked by a woman if we wanted to sign her petition. Being Chicago residents and not quite understanding what she was chanting we declined. 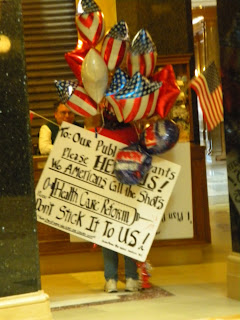 Later that day we went to the event put on by Jeanne of Cheese Underground and Wisconsin Cheese Originals Fame. It was called Wisconsin vs. the World, and I have to be honest and say that in general, Wisconsin kicked the world's butt. My journey started in Japan and ended in the rolling hills of Wisconsin.

This was the first cheese I tasted at the event. Also the first time I'd ever had the opportunity to try a cheese from Japan, and well, I was a bit underwhelmed. For a Gouda I expect a bit more flavor, more oomph, more pizazz. The representative at the table told me that the cheese is made for the Japanese palate which likes cheese milder than their American counterparts. 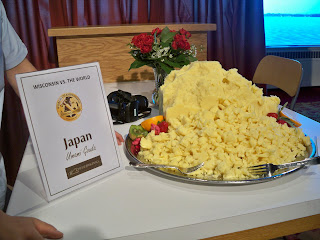 It was St. Patrick's Day so I had to try the Kerrygold Cheddar. Yes, I would've rather had Coolea, or Ardrahan, or Cashel Blue, but the Kerrygold is what was there, so I tried it. Firm, aged for about 12 months, creamy and a little moist. Tasty little cheese. Side note: did you know that Kerrygold sells milk powder? 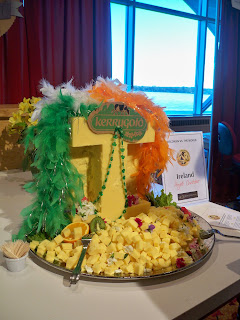 No. Nonononononononono. Here's what I know of New Zealand: LOTR, Flight of the Conchords, sheep, and based on LOTR gorgeous countryside. Yup, I know almost nothing about the country, it's people or it's cheese. I was very excited to taste the blue from New Zealand. Then I was sad. Very sad. And had to take a swig of my friends' beer to get the taste out of my mouth. It smelled like barn. It tasted like an unmucked sheep's stall. When I asked about the cheese, I was told that it was cow's milk, not sheep. I remain unconvinced. The cheese smelled like manure and old wet wool, tasted like a barn and old wet wool, and had a big fatty mouthfeel. In any case, it was a cheese that made my mouth sad, and a little angry. 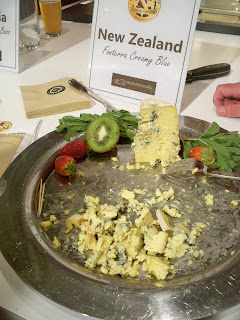 Luckily, one of the best Cheddars in the world was also at the contest. Keen's Cheddar. This is a raw milk, farmstead cheese from Somerset. Nutty and a bit buttery with a finish that just won't quit this cheese made my mouth happy again. When I first started working at the cheese shop in Chicago we were getting Keen's and Montgomery's. Now we only get the Montgomery's. I'm trying to get that changed. I miss my Keen's. I miss her dearly. Yes, I went back for thirds. 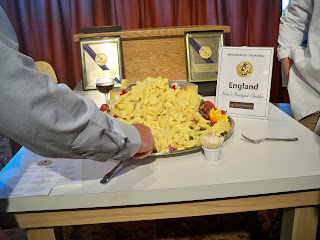 I tasted a lot of WI cheeses that I loved. Some Gouda from Holland's Family Farm, Bohemian Blue from Hidden Springs Creamery, a lot of Hook's Cheddar, and a Brick cold pack cheese spread from Widmer's Cheese Cellars that knocked me off my feet. My favorite new to me cheese was from Bleu Mont Dairy. A three year bandaged wrapped Cheddar. Vibrant, staw, pasture, acidity, butter, and a long finish with subtle caramel notes made this cheese a first place winner for me. Unfortunately, Willi does not ship his cheese to Chicago. Yet. Our senior buyer is working on it. For the time being I'll have to go to the Dane country farmer's market, or to the source itself to taste his aged Cheddar. I think I see a road trip in my future. 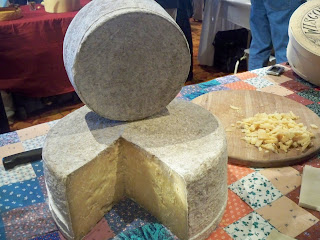 Oh yeah, the man can yodel. I think everyone who was at Jeanne's event until the end got a video of this, but mine has really bad lighting so there! More on the actual contest in part 2.

Posted by Cheesewench at 9:19 PM

Usually, it's not cheese that brings a yodel out of me.
;)

this looks like cheese heaven...i lurve all the cheese in different forms

Sign up at casino register bonus and claim your $200 free