I started my day Saturday with a huge breakfast bowl of rice, beans, avocado, corn, eggs and cheese. Took a shower, put on a super sweet Threadless t-shirt and waited for my brother to come and pick me up so he, my nephew and my sister-in-law can go to Costco.

For the record, I've never been to a Costco before. I was completely unprepared for the sheer ginormity of the place. When I was a kid my biological mother, brother and I were poor and would go to the food shelters once a month with a voucher to get staples. Usually those were 10# cans of tomatoes, peanut butter and jelly. I remember feeling completely overwhelmed every time we went in.

Costco is just as overwhelming. Especially for a single gal. I mean, I love soy sauce but gallon jugs of the stuff is just too much.

Our plan is to go to Costco quarterly for all our bulk needs. My personal mission was to get ridiculously large amounts of paper products, vitamin water by the case and to check out their cheeses. Budget: $150

The ridiculously large quantities of things didn't change once entering the cheesy area. 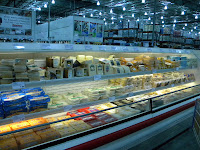 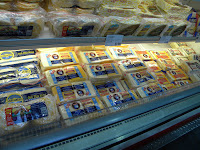 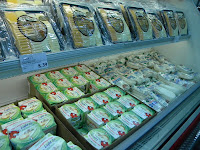 The weird thing about going to Costco is that it's the complete opposite of what I do on a day to day basis. The shop I work in focuses on small artisan producers. People who work off the grid, people who call their animals by name, people who work sustainably, seasonally and humanely. Looking at the cases of processed "cheese" just weirded me out. I felt like at any moment I'd see someone from work and have to explain what I was doing ogling the little individually waxed wrapped cheeses that I secretly love. 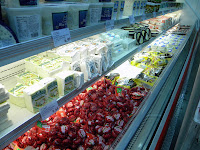 Yes, that is a pie in the cheese case. It was a a peach pie. By my judgement, that pie was a 12" monster of canned peaches in syrup in a pie shell with a fake lattice top. And by the way, it's sitting on top of the Mexican style cheeses. 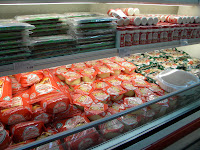 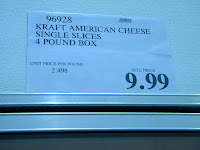 Even more disturbing than the 3lb. bag of shredded mozzarella or the 4lb. log of processed cheese singles was this. Brie slices. Based on the packaging it looks like the "Brie" has been formed into some obscene shape so it can be sliced on a deli slicer. This was the creepiest thing I saw. 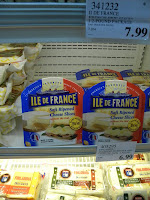 My first trip was a success, but I think that going quarterly is going to be enough big bulk warehouse shopping for me. It's just too weird looking at non-restaurant food in that volume.
Posted by Cheesewench at 8:10 AM