I spent hours with cows and didn't get trampled. Yippee!

There are two more Vermont oriented posts coming your way and then I promise to pepper in some non-Vermont oriented cheese love although I am planning on going back in October, so be prepared!

Today is about the first part of the Vermont Farm Tours. The first farm we went to was Crawford Family Farm in Whiting.

The Crawfords have been farming in Whiting since 1950 with the women in the family taking the lead roles. There are 300 acres of land and 50-60 Ayrshire (air-sheer) cows on the farm. Out of that number, only 18 cows and 6 heifers are milked for cheese with the rest of the milk going to fluid milk sales.

While Sherry makes a number of cheeses that are each tasty in their own right, the cheese you want to get your hands on is the clever and aptly named Vermont Ayr. This Alpine style cheese is made in small batches, brined and then put on ash wood planks in their aging room for anywhere from four months to a year.

During our visit Sherry played an educational game with us that she usually uses with school children to help them better understand what it is a cow does and how milk comes to be. While it was a little bit silly talking in a circle about how grasses "mooove" from the mouth through the digestive system it was fun too.

Then came the tasting portion of the tour. We were given tastes of three different batches of Vermont Ayr. I made my tasting notes on a piece of paper towel since my notebook and pen were foolishly left in the other room.

July '09- A bit flat, slight ammonia in the rind, higher acidity like lemon zest, dry and a bit like an American Parmesean.

The above notes are why you should ALWAYS TASTE BEFORE YOU BUY! I don't care if you think you've had a cheese a million times before, a few months can make a huge difference in the flavor profile.

One cheese with 3 different ages and three completely different flavor profiles. Although in the minority, my favorite batch (and my brothers'as well) was from March of 2010, while the majority of the other tour participants went for the November 2009 batch.

Here Sherry is showing us her "high-tech" milk quality checking equipment. If the milk is funky here, she checks it out further before turning it into cheese. 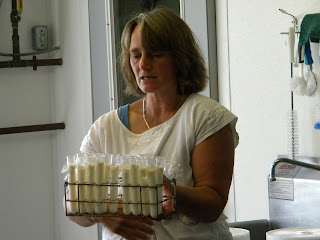 Sherry offered everyone a taste of raw fluid milk. I proudly stepped forward along with some others to try a taste of something that causes controversy in the cheese world and among fluid dairy farmers alike. It was delicious and tasted more buttery and creamy than that stuff you see in the supermarket. It had flavor instead of just tasting like cold dairy. No one died and no one got sick. We also got to taste some of her yogurt which was yummy too. 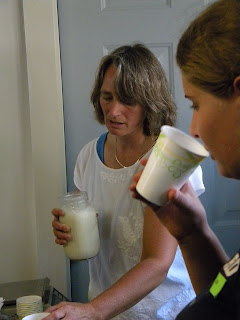 My brother LOOOOOOVES cows. Seriously. He is a big ol' cow-loving freak. As you know from a previous post, I have a bit of a fear of cows. Luckily my brother was there to keep the calves from trampling me to a pulp. 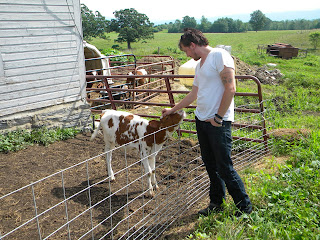 Cows are beautiful and sweet. I know this in the logical part of my brain. They have stunning lashes, big brown eyes and super soft muzzles. They will give you big sloppy kisses with their tongues, and mouth your hands. They'll also crush you with their hooves of fury as soon as you let your guard down. Here I am protected by fencing but you can see that the calf is giving me the hairy eyeball right? That little moo-cow is just waiting for me to relax. 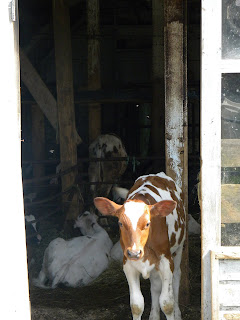 After Crawford Family Farm we went to Dancing Cow Farm in Bridport. From their website,

Dancing Cow Farm
At the end of a Vermont country lane, sits a farm with red barns and a small white house. It's centered in the middle of 243 acres of organic pasture and hay fields. With views of the Green Mountains to the East and the Adirondacks to the West, this is home to a herd of blissful bovines. These wonderful cows of all sizes, stripes and colors eat the grass, share their milk, and live their lives peacefully.

The farm is just as beautiful as described. So why is it called "Dancing Cow Farm"? Here's the cliff notes version.

When the cows are finally out on pasture after a cold Vermont winter of snow they are so excited to go out that they jump and frolic and play. After searching for a name for the farm during a conversation with a friend after describing the dancing cows the question was asked

"Oh, so is that the name of your farm? Dancing Cow?"
"Yes" replied Karen-a woman who knows a good thing when she hears it.

If you've never seen a 1000 pounds of moo-cow playing, you're missing out. It honestly does look like they're dancing.

While I love all of the cheeses they make, my favorite, hands-down is the Sarabande. I first tried Sarabande at my last trip to Vermont last summer. Unfortunately I didn't see any Sarabande out for sampling or for purchase. I asked Karen where my favorite cheese was and she told me that it hadn't gotten to it's 60 day age so she was unable to sell it. I must have looked pathetic because she went into the aging rooms and got a wheel out for us to taste.

I still love Sarabande, although since it was young, the flavor profile was a bit different. Instead of this creamy stinky, fudgy, smoky, grassy, milky bomb of funkiosity it was a mild, buttery, fresh grass cheese that was just developing a bit of smoke and tasted like sunshine. I know that's an odd description to give to a cheese, but I don't know how else to describe it. It tasted like a nice warm day in summer. I was ready to bribe her to part with some of the cheese, but I thought that might cause a riot among the others, so I kept quiet and happy by eating most of what had been cut for sampling.

Her name is Lindy Hop and she's the first blue from DCF (I'm getting tired of writing out the whole name of the farm, although logistically speaking it took longer to do this explanation). The sweet and supple paste has a flavor almost like clotted cream. It's so rich and creamy-although not gooey spreadable like a Brie. With notes of clover and a slight saltiness in the rind and I have found another favorite cheese to add to my always growing list.

When looking to sneak another taste of cheese I find that Legolas is right. We needed "a diversion". "Hey! Look over there quick!" That totally worked.* 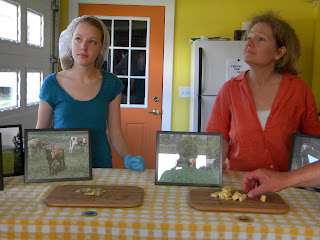 lunch during the VT Farm Tour was underneath a few trees near their contented cows. 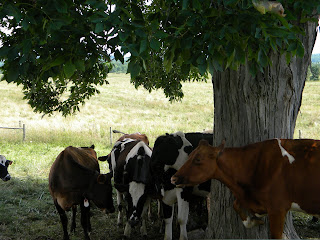 Unfortunately we didn't have a lot of time at the farm and soon we had to be on our way to Twig Farm. Hopefully I'll be able to go back soon, spend some more time talking to Karen and her family, get over my irrational fear of being trampled by cows and get some Sarabande for the ride home.

*Okay, that caption is totally misleading. This is one of those photos that just kind of happened at the right time. Karen's' husband had just walked in. We weren't tricking her into giving us more cheese, although someone in the group clearly decided to take advantage and swipe another morsel of yumminess. Oh, and if you don't know what I'm talking about with the Legolas reference you need to re-watch the Return of the King Extended Edition right now!
Posted by Cheesewench at 12:54 PM