My Brother Is Awesome

My most recent cheese journey was just last week when I went back to Vermont. I used the excuse that I wanted to go to the Vermont Cheesemaker's Festival, but in all honesty I just wanted to go "back home".

I know, I know, I've written posts about going back home to New York as well, and on some level I'll always be a girl from Queens, but Vermont is my soul. My most favorite thing to do when back in the Green Mountain State is to hang out with my brother. No, not that brother, the other one. The "good" one. The one who let's me crash on his bed while he takes the air mattress. The one who picks me up at the Boston airport just so we can go to a cheese shop and then drives me all over Vermont looking for tasty cheese. The one I haven't seen in a year. My best friend and emotional twin.

The next few posts are all dedicated to my fantastically wonderful, bad-ass, kick butt drummer, illegal-car driving, border-patrol avoiding, can't grow a full bushy beard to save his life brother. Thanks for making last week awesome!

On day one I landed at Logan airport with a GPS and an address of a cheese shop. Located only 10 minutes away from Logan on a tiny quiet little street is South End Formaggio. This shop might be small, but it is jam-packed with goodies. They have a lunch counter where you can get a huge ham and butter sandwich or even half a roasted chicken. There's a great array of cured meats and pate, craft beer, artisan wines, jams, mustards, crackers, some seasonal fresh fruit, frozen treats, tons of delicious chocolate and of course cheese. They are a cut-to-order shop with no minimum cut and let you taste just about everything. That's my favorite kind of shp to visit. I don't like being forced to buy a certain amount of cheese. I like to pick and choose, using measures such as "a smidge" and "sniglet". I forced my brother to try everything with me-even things he wasn't terribly excited about. We ended up with some Taleggio, Selles-sur-Cher and some especially fruity and nutty Comte.

Selles-sur-Cher is one of my favorite goat's milk cheeses. It's just a small disk of fresh chevre from France that has been rubbed in ash. This cheese is sublime. It has a firm texture with a bit of a sour, salty sweetness and barnyardy notes too. Unfortunately, since the AOC cheese is made from raw milk and the cheese is aged less than 60 days, in the U.S.A. we can only get pasteurized versions. The "authentic" cheese is very similar to the pasteurized version except it has a bit more goatiness to it. Although very similar to Bonne Bouche in size, this cheese is a bit more mellow, and tame. It's the "Cathy" to Bonne Bouche's "Patty" We ate it while watching Meg Ryan movies and mocking her precocious "acting skills".

The next day we took the "scenic" route (some might say we got lost) to Shelburne for a Vermont Farm Tour. Our guide was Chris and 14 of us set out to visit three artisan cheesemakers in Addison county. Doing the tour with Vermont Farm Tours was awesome. Two of the cheesemakers I'd wanted to visit on my trip to Vermont were on the tour: Twig Farm-makers of obscenely delicious cheese and Dancing Cow-cheesemakers who name all their delicious cheeses after dances. Taking the tour meant less driving for us and a more relaxed atmosphere. 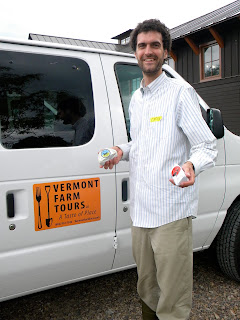 There were people of varying experiences there. One couple from Canada who are putting together an artisan cheese festival in June. One couple from Mexico who had a small herd of goats and were embarking upon their own cheesemaking journey-even though they don't like goat cheese. It was interesting being surrounded by so many people and having a chance to look at the cheese world through the eyes of others.

Of course we did the Vermont cheesemaker's Festival as well. I decided to splurge this year and buy the wine glass so I could taste and get...happy. The bro was stuc as the designated driver since it doesn't take much for me to be unable to drive. My favorite things from this year's festival were the Eden Ice Cider, Triple Cream and Cream Cheese from Champlain Valley Creamery, and this wicked awesome cheese I'd never had before from Cricket Creek Farm called Tobasi. Tobasi is a seasonally-made semi-soft raw cow's milk cheese, aged for about 3 months. It looks like tree bark, and it tastes a bit like a mild Taleggio. Full of grassy, nutty, creamy, earthy, lactic notes. No, I don't' know why a cheese from MA was at the VT Cheesemaker's Festival.

Tobasi is delicious and looks like tree bark and cheese had a baby. 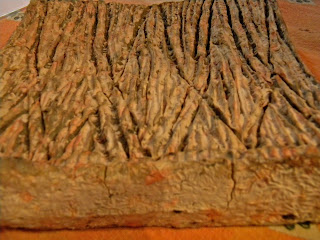 They had a little pen with a sheep and two snow white little goats who like to play. 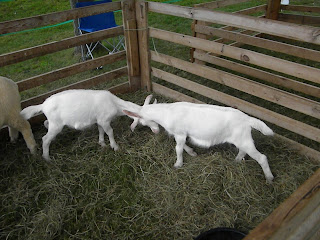 I love this t-shirt from Vermont Butter & Cheese Creamery. 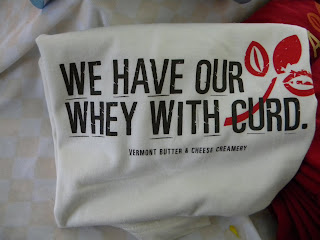 I love going out to breakfast. Especially when I'm in Vermont (real maple syrup on everything). If you enjoy deliciousness you have to make sure that you stop at the Penny Cluse Cafe in Burlington and get an order of gingerbread pancakes. They are light as a cloud, full of flavor, and hearty. I love them year-round, but can't wait to have them in the winter when it's really cold outside. I forced my brother to make a stop on our way to the festival. They also have fantastic juices made on premise. The grapefruit is especially divine.

If you're in Montpelier stop at Kismet Kitchen on Barre street. Fresh juice bar, local and organic foods, vegetarian and vegan options and specials that truly are special. My favorite was the fried green tomato Benedict. Oh, and thanks to the awesome server who let me go on and on about my slight obsession over duck eggs and then offered to poach some as a substitution for chicken eggs. It was the last thing I ate on this trip to Vermont, and one of the best.

Oh Vermont I miss you already, but not for long. I have decided to leave Chicago this year. When I first moved here to work at Spiagga I planned to be out here for one year and then move back to the East Coast. This summer was my sixth in the Windy City. I have had great experiences working in fantastic restaurants, and of course getting to work in a great cheese shop for the past few years, but I'm not a big city girl, and every time I go back to Vermont I'm reminded of that.

Dear reader this is where you come in. If you know of anyone looking for a cheese-passionate, slightly off-center, cheesy lass who can sing, plays the tambourine* and adores Vermont let me know. My email is cheeseisalive@gmail.com

Things that I will be addressing in upcoming posts:

My Brother Is Awesome but not as cute as goats
I am the macaroni and cheese champion
What's that smell? Oh, it's coming from my suitcase.
Farmstead cheesemakers are awesome and raw milk didn't kill me
Lazy Lady Farm and avoiding the border patrol

*Technically I don't actually play the tambourine, but it doesn't look too hard. I'll learn.
Posted by Cheesewench at 10:35 PM

Love it! I'm looking forward to reading more about your VT adventures!