I know almost nothing about Texas. What I do know is based on my visit to Austin for the ACS conference last year and what I've read on the back of cars:

1. Texas summers are too hot
2. The tacos weren't as fantastic as I was lead to believe they would be
3. Although no reason has ever been given I believe I'm not supposed to mess with Texas
4. They make some tasty cheese

Today we're talking about a delicious goat cheese from the Mozzarella Company in Dallas. Inspired by the French cheese, Banon Hoja Santa joins my ever-expanding list of cheeses I adore.

Hoja Santa (translated it means "sacred leaf") is a plant found locally in Texas. It has a heart shape and can grow to be 1 ft in diameter. The best thing about the plant is the flavor profile. Sassafrass, eucalyptus and mint are all characteristics of this incredibly versatile plant that can be used as a wrapping for tamales, in sauces or in today's focus as a wrapper for cheese.
Fresh goat cheese usually has a citrus acidity to it, but I've noticed that goat cheeses from Texas seem to have a bit more of a peppery piquant flavor as well. This is where terroir comes into play. The grasses that animals are eating in dry areas is going to be different than the ones in New England or Wisconsin, so instead of a fresh grassiness, you get more dried hay, and toasted, flavors.
This slightly peppery goat cheese, when combined with the Hoja Santa leaf makes for a fantastic cheese treat. The texture is soft, creamy and moist while the flavor just explodes in your mouth. If you're thinking that root beer, pepper and mint sounds like it might be a weird combination in your mouth you're so wrong! Eat this cheese straight up, turn it into a savory flan, or pair it with horchata and a crust of bread. Any way you slice it, your tummy is in for a taste sensation! 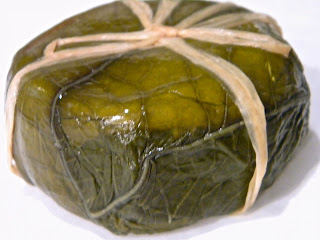 Posted by Cheesewench at 9:27 AM 4 comments

Overheard on the bus the other day:

This statement was issued by a fellow bus rider who had sat down next to me and got up within a few minutes to move to another section of the bus. I wanted to shout out,

"It's not me, it's the cheese!" but instead I sat there quietly listening to my ipod, pretending I hadn't heard the comment.

What was this stinky bomb of funkiness that had people fleeing?

You're all familiar with Epoisses right? No? Well, it's that big funky stanky cheese that's actually illegal to take on public transportation in France. It comes in a small wooden box to keep it from turning into a big gooey mess . This cheese is a miniature version of that cheese.

Epoisses, made in the Burgundy region of France dates back to at least the sixteenth century. The cheese is made from cow's milk, and as you can tell by it's orange hue, it is a washed-rind cheese. The Epoisses is washed several times a week in a mixture of water and Marc de Bourgogne.

At the beginning of the 20th century the cheese was still popular, but then started to die off until it was nearly extinct. Fortunately, in 1956 the Berthaut family started making authentic farmstead Epoisses, and the cheese gained in popularity once more, eventually gaining AOC status in 1991

Trou du Cru was developed in the 1980's by Robert Berthaut. In essence it is a miniature Epoisses, but in my opinion it is the tastier of the two.

So what are the differences with the two cheeses? First off is the obvious size difference. The Epoisses most common in the U.S.A. comes in at a bit under 9 ounces. Trou du Cru comes in at about 2 ounces. Epoisses is aged for at least five weeks, Trou du Cru for about four. The biggest difference has nothing to do with size, but pertains to the flavor profile.

Epoisses, when ripe gets an ooey, gooey, creaminess that's almost unreal. It is smooth, sweet, slightly stinky and delicious-If you like salt licks. A fully ripened Epoisses is just way too salty for me. Just so you don't think I'm a salt wimp I'll tell you that one of my guilty pleasures is eating kosher and sea salt as a snack. I love salt. It's one of my favorite foods groups. Epoisses is just too salty for me.

Trou du Cru on the other hand is very well balanced. It has the strong smells of cheese, body odor and slightly soured milk but the paste is just soooo good. It's super creamy, sweet and lactic, a bit beefy and fruity with just a smidge of floral notes. It is one of my favorite new cheese friends.

If you love Epoisses, you have to try Trou du Cru. Just avoid public transportation.


The cheese is pictured with some balsamic marinated onions, country pate, whole grain crackers and a bit of mustard. The cheese was so ripe I had to scrape it out of its paper doily that it was wrapped in. It just oozed onto the board in a silky mess of cheesy goodness. 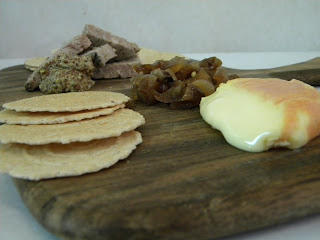 Posted by Cheesewench at 8:35 AM 2 comments