I know it's been a while since I last posted. Things in Chicago are getting a bit stressful. We're coming upon the holiday season which means that I'm working more and sleeping less. On top of that, I'm trying to find a job and apartment in Vermont so that when I move in the new year I don't have to live on the air mattress at my folks' house.
Last week I was back in Vermont supposedly checking out the job and apartment scene. On Tuesday however I was being a lazy gal, sitting on the porch watching Netflix streaming video and tempering my cheese for breakfast.
First up is from Blue Ledge Farm in Salisbury, Vermont (although on their packaging it says they're in Leicester.) Blue Ledge Farm is a small family farm making farmstead seasonal cheese for ten months of the year. According to their website they have around 75 milking goats who produce enough milk to make approximately 11,000 pounds of cheese. I know that sounds like a lot of cheese, but it's really not. Let's compare Blue Ledge to another artisan farmstead goat cheese producer and let's use really round numbers.
Let's say that you have 1000 goats on your farm. Each of those goats produces 1 gallon of milk a day. It takes about 10 gallons of milk to make 1 # of cheese. That farm could potentially make 100 pounds of cheese a day. Blue Ledge on the other hand, with their small herd would make less than 10 pounds of cheese a day. Of course there are variations to consider such as what kind of cheese the cheesemaker is creating that day, the composition of the milk they're using (butterfat is soooooo important*) and how long the cheese is going to be aged but that just gives you a rough number to look at.
Enough with the math, back to the cheese.
Crottina is a young bloomy rind cheese aged for less than 30 days (that means it's pasteurized) that looks similar in shape to Constant Bliss or a slightly bigger (than I'm used to seeing) Crottin. The outside is super fluffy and white like chalk. It smells a bit like mushrooms before washing, and a bit like watercress. The interior of the cheese has a very soft and creamy appearance and tastes goaty, vegetable-y, with just a wee kick of salt and a nice mushroomitude that makes me quite happy. Fantastic farm and delicious cheese.
They also do a lot of flavored fresh chevre. One of my absolute favorites is the maple chevre. What do you do with maple goat cheese? You can make stuffed french toast, pancakes, crepes, flan, cheesecake, swirl it into a brownie, napoleon, salad, stuffed in a chicken breast, or pork loin. I mean...there's so much you can do with that little package of tastiness. Next time I get some I'll make a tasty recipe and share it with you. Promise.
No trip to Vermont would be complete without me getting a tasty treat from Lazy Lady Farm. Today's treat is called Sweet Emotion and is a mix of goat milk and cream from a nearby cow dairy. This cheese has a very stong mold aroma to the rind. The paste itself is very different. It has a slightly sour tang like sour cream, has a mild goaty flavor and tastes the way a bell pepper smells when you cut it. Interesting, very mild and another unique offering from Laini and her goats.
Me, sitting on my brother's porch on a rather overcast day. Just eating cheese. 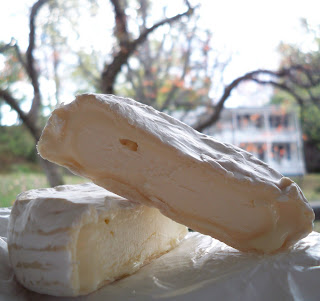 *Milk that has a higher butterfat content means that you can make more cheese, with the same amount of milk. Again, it depends on what style of cheese you're going to make, but butterfat is a very good thing.
Posted by Cheesewench at 9:02 AM 2 comments