It's hard to talk about Rush Creek without also talking about Winnimere and Mont d'Or (AKA Vacherin Du Hauts-Doubs) and maybe even Forsterkase as well. I'll do my best to tackle all of them today.
Every fall customers call on the phone to ask one very important question:
"Do you have Vacherin Mont d'Or?"
Every year I give the same answer:
"Unfortunately, sir/ma'am, we don't carry raw milk Vacherin."
I loathe having to give any customer a "no" and so after hanging up with the customer I go into the back of the shop and weep salty tears.
*shakes fist at the ceiling*
"Why isn't there an American made artisan cheese that has the silky, naughty texture of Vacherin Mont d'Or but is more accessible to me and my customers?!"
Finally this year there is a very good representation of the custardy cheese from France (and Switzerland).
Her name is Rush Creek and she's my precious.
To the uninitiated Rush Creek might look a lot like one of my favorite seasonal Vermont cheeses, Winnimere. Lets compare and contrast.
The following are my notes from a side-by-side tasting conducted with both cheesemakers when they came to Chicago in early November.
WINNIMERE: A raw cow milk cheese, belted in spruce bark, washed in beer and seasonally made from autumnal and winter milk*. It weighs about one pound per wheel. Wheels are creamy, though not runny, and have aromas and flavors of smoked bacon, toasted nuts, cured meat and savory flan.
RUSH CREEK: A raw cow milk cheese, belted in spruce bark, brine wash and seasonally made from autumnal and winter milk. It weighs about 3/4 of a pound per wheel. Wheels are uber creamy, runny and gooey like a ready-to-eat fondue. Flavors and aromas of smoky bacon, campfires, custard, sweet milk and a bit wheaty. Perfect for a 9 1/2 Weeks movie re-enactment.
So what is the cheese commonly known as Vacherin Mont d'Or all about and why do people go crazy for it? Although we usually attribute this cheese to France, truth is due to the location of the mountain that the cheese is named for both France and Switzerland make a version of this cheese. The raw milk French cheese is also called Vacherin Du Hauts-Doubs or just Mont d'Or while the pasteurized cheese of Switzerland is usually called Vacherin Mont d'Or.
The cheese is made seasonally. According to AOC regulations set in the 1980's, can only be made from September through early May. She's belted in bark and is a creamy dreamy fondue-esque cheese that people go just gaga for. Or so I've heard. Although I've has pasteurized versions of the cheese I've never had raw milk Vacherin before.
Before Rush Creek came onto the scene people would compare Winnimere to Mont d'Or, but to me it's always been a bit more like the Swiss cheese Forsterkase. Creamy yet solid paste, woodsy aroma, a bit baconish.
For this year, Mateo has changed the consistency of the Winnimere somewhat. It's not as creamy as in previous years. The cheese also looks darker than in previous years, and doesn't have the right funkatude to it. I usually wait for the wheels that arrive in March when I think the funky aromas and creamy mouth feel are at their peak.
No matter which cheese you manage to find in the cheese case, they're all delicious. We're in the best part of the year, WASHED RIND SEASON! Nom nom nom.
*autumn and winter milk has a higher butterfat content and the structure of the milk makes it especially good for making washed rind cheese like Winni, Rush Creek, Forsterkase and Vacherin.

When I promise you an overwhelmingly mediocre video I deliver! This week is Christmas and I'm wondering, what's going to be on your cheese plate?
Posted by Cheesewench at 10:43 AM 0 comments

Now that it’s almost Christmas I’m finally going to write about our Thanksgiving feast. I celebrated with my 3 yr old nephew, my brother and sister-in-law (both vegan*) and two other friends. There was a tofurkey that word just looks really dirty in print for the vegans and a big ol’ bird for the omnivores. I made my world famous sweet potato pie with pecan butter crust and a veganized version that was bereft of the richness that can only be accomplished with two whole sticks of butter but was tasty nonetheless.

But you don’t care about that stuff do you? Of course not, you wanna know about the cheese. Before dinner we had a lovely little cheese course. The crackers were from 34 Degrees. The Apple Butter comes from Seedling in Michigan. The Fig and Black Tea jam from the amazingly awesome, super-cute and nifty husband and wife team, Matt and Clare of Quince & Apple.**

On to the cheese. First on the list is Bonne Bouche. You know my love for that cheese; my obsession with it’s silky, creamy, goaty goodness. I’m not going to expound too much except to say that goat cheese + fig and black tea jam = super awesome happy tumminess.

Next up is Quadrello di Bufala. You know that cheese from water buffalo milk is delicious right? Of course you do. You also know that water buffalo milk has a high butterfat content and makes everything super tasty right? Imagine if you a will a cheese made from the rich, fatty goodness of water buffalo milk, washed rind and inspired by Taleggio. What you get is this cheese that has a rough looking rind (a bit like tree bark), a soft (not gooey) paste and an almost indescribable taste. It’s a bit like butter and cream and sweet almond milk came together and had a delicious baby. It’s not as stinky as my beloved Taleggio, but it sure is delicious.

Here in the States you don’t usually see a lot of water buffalo cheeses, and when you do it’s usually Mozzarella. Tasty, but boring considering what is out there. Do yourself a favor and the next time you’re at the cheese shop/counter/auction ask your monger for a taste of anything with water buffalo milk . Delish!

Next is a cheese you won’t find for sale. A “Reblochon” aged for less than 60 days. Yes, it’s contraband cheese. I don’t care. A cheesemaker friend is experimenting and one of the benefits of having chesemaker friends (or in this case a friend of a cheesemaker friend) is that you get to try all manner of cheesy treats. Sometimes they’re delicious and your friend lets you cut a big chunk of treat and you share it with your friends on Thanksgiving. Some days I’m positive that I have the best job in the world.

While I’m not going to talk about this particular attempt at Reblochon (the flavor was there, but the texture needed work) I will tell you a bit about the actual AOC protected Reblochon from France.

The story behind the cheese is that back in the medieval days farmers were taxed based on how much milk their cows produced. In order to “mislead” the inspectors the farmers would milk the cows partially and then when the coast was clear would milk the cows again. The word reblocher loosely translates to the practice of the second milking. The second milking was used to make Reblochon.

Reblochon reblocher. Reblochon, reblocher. Uma. Oprah. Pretty nifty hu? Reblochon is also one of the most popular cheeses of France that you might never try in the States due to it’s raw milk, aged for less than 60 days status. If by some chance you get the opportunity to taste its luscious, creamy, paste please do.

Then there’s the BIG DADDY. My new bestest friend in the cheese world. Weighing in at approximately 12oz, coming from the rolling hills of Dodgeville Wisconsin from Uplands Cheese it’s RUSH CREEK!

About a month ago Rush Creek was released to much acclaim, and a frantic elbow-throwing desire by the public that I haven’t personally experienced since the Cabbage Patch Doll craze of the 1980’s. Yes, I'm that old. If you don't know what Cabbage Patch Kids are, think about the Tickle Me Elmo craze and you'll be on the right path.

What makes this cheese so special? I will try to speak of it critically, not emotionally.

Okay, so not completely without emotion, I can't help it, Andy and his wife (Mike, Carol and everyone associated with the farm and creamery) are super nice. Why does that matter to you? Here's my "logic".
People who are nice to people are also often nice to animals
Happy animals give you better quality product
Better milk = better cheese
Better cheese = happy people
Happy people are usually nice.
Nice people are nice to people
People who are nice to people are also often nice to animals
And that is my totally sciencey way of explaining why this cheese is so frickin good.
But wait! There's more! At the risk of making this my longest post ever and boring the stuffing out of you (that joke would've killed on Thanksgiving) I'm going to tell you more about Rush Creek in another post this week. There will also be a pooorly constructed video on how to remove the top rind. The video will also have unfortunate music to accompany it. 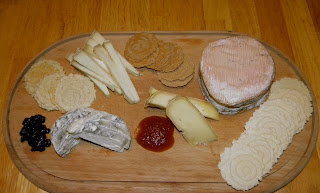 *Yes, they're vegan. Normally I would shun those who don't eat fromage, but they trust me and the cheeses I bring over and so cheese is the one exception in their otherwise vegan world.
**Matt & Clare are super awesome and their preserves are delicious. They make seasonal nummies, are very creative with new flavors (gala apple and sparkling wine is one of their newest), are wicked nice, bust their butts in their tiny workspace and are primed to be the next big thing in jam.
Posted by Cheesewench at 12:31 PM 0 comments