I can cross one thing off of my resolution list. Right here and now I declare that orange cheese is no longer the devil. Yes, milk isn't orange, and there's a part of me that still doesn't get the orange Cheddar thing found so much in the Midwest, but I have found a tasty tasty cheese that has proven to me once and for all that orange Cheddar can be, and in fact is tasty.

This miracle cheese came to me courtesy of Widmer's Cheese Cellars in Wisconsin.
Joe and his family have been making cheese for 80 years. He has also gone through the Wisconsin-only Master Cheesemaker class, coming out of it not just a Master Cheesemaker of Brick Cheese but also of Colby-both cheeses with origins in Wisconsin.
His cheeses are delicious, but that's not what we're here for. We're here because his 8 yr. Cheddar has blown my cheesy little mind.
If you told me a year ago that an orange dyed Cheddar that was pasteurized and aged in plastic would be one of my faves I would probably respond by kicking you in the shins, or maybe by forcing you to eat generic processed cheese slices until you begged for mercy. I would have been wrong, and I apologize for doing those hypothetical things to you.
I love this cheese so much. It's tangysharpsaltysweetmilkycrystals of crumblyfudginess are fantastic. How does he do it? How does he turn years of my "cheese shouldn't be orange" stubbornness into "Schnicklefracks! This is some dang good cheese!"
All I can say is that this man (and everyone who works at the cheese plant) have got some serious cheesemaking, Cheddar-crafting skills.
Kudos Joe, you've made a believer out of me! 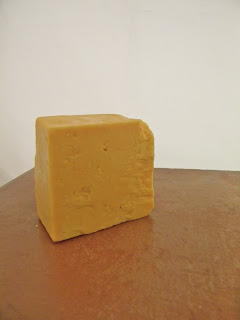