It's official! I left my job, packed up the apartment and moved back to Vermont. I've been in town for just a few days and I thought it was about time I checked in with everyone.
One of the things I loved best about working in the cheese shop was I had fantastic cheese at my fingertips every single day. The negative was that even though I got an employee discount, I ended up blowing a lot of my income on cheese.

A little while back (pre-Vermont move) I splurged on some nummies to share with some friends. Today we're talking about Grayson (wedge with deep russet coloring) and a brand new cheese Mini-Grayson (isosceles triangle in the front) 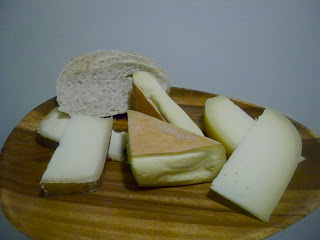 Both cheeses come to us from Meadow Creek Dairy in Virginia. In fact, I wrote a post about Grayson here if you want to check it out.
Grayson comes in a large 4# format, is made of raw cows' milk and bathed in a brine solution. The wheels have developed a strong, mammalian odor mixed with hay and barn stall. Mini Grayson on the other hand is a wee little thing coming in at about 1# per wheel. The other big factor in this cheese is that it is washed in beer from Highland Brewing Company.
So how does a beer wash and a smaller wheel change the flavor and texture profile of the cheese? Since both cheeses are made from raw milk they have to be aged for 60 days before they can be sold to the public. In the smaller wheel, this means that the cheese is ripening a bit faster, and when we get it in the stores it's not just creamier than the regular sized Grayson, but has developed more of its flavor by the time it reaches us.
While Mini Grayson definitely brings the funk to a party, it's milder than her big cousin. Now, part of that is because it's wintertime, and the cows have a different diet going on, so you're not getting those big grassy, sunshiny flavor components that can be found in summer and autumn wheels. What it does have is a nice yeastiness that comes through, and some flavors of hay, licorice, hops and a very faint browned butter aroma. Quite yummy and a must for spreading on toasted bread.
So which one is my favorite? I'm sticking with the original, preferably the wheels that we get in the late summer. Those wheels might not be as creamy in texture as those made with winter milk, but the depth of flavor and stinkiness is right up my alley.
Posted by Cheesewench at 12:00 PM

Grayson sounds delicious. Must find some. And welcome (back) to Vermont!

Thanks Rebecca! It's great to be back home!

I love Grayson, but had no idea about a mini beer-washed version existing until your blog. Sounds amazing from your description/comparison!