Like the title says, this post is about my cat.  It is not cheese related, and for that I do apologize. I promise the next post will bring us back to the wonderful world of cheese.

Remember back at the end of February when I told you that I was moving back to Vermont, and then in March I did, but was living at my brothers' house and didn't have a job or car and was thinking that moving without a job or car or any real $$ in the bank was one of the most impulsive (and stupid) things I'd ever done, and I'd lost all my pants somewhere in Ohio or Indiana (long story) and I was pretty sure that that was a sign that I shouldn't have moved back to Vermont, but then things got better because there was an opportunity for me to work on a farm store and I could move out of my brothers' place and everything was going to be okay, and it was a good thing that I'd gotten out of Chicago?  Remember?

Well, one of the things that I hadn't really considered was how the cat was going to adjust.  After living with just me (or me and one other person) for the past 7 1/2 years she was a bit freaked out about moving into my brothers' house.  Lots of people going in and out, and another cat was living there.  She hates cats.  I thought that moving out to a quieter part of Vermont, and living in a quieter house would be good for her.  I even had the dream that she be an indoor/outdoor kitty and would find her inner wild kitty.  She would hunt and chase things and then there would be rainbows and unicorns and glittery sparkly stickers!

A few days ago I took the cat out to walk around the farm. Everything was okay.  She was a bit timid, but was starting to enjoy following me around the farmhouse.  I had high hopes that she would become a wonderful outdoor kitty and would kill the voles that have been terrorizing the tomato plants in the greenhouse.

Someone pulled into the driveway.  And a super friendly and curious dog (she usually likes dogs) came around the corner.  To my cat that meant one thing; time to panic.

She fled to a corner of the workshop filled with all sorts of solvents, an air compressor, and tools that could poke out an eye.  I had to drag her out of that hole two times.  After being in the workshop I gave her a little bath to try to get any gunk off of her.  I shold've known something was wrong when she just sat there with huge, green, bewildered kitty eyes and let me give her a bath.  Not a good sign.

The past few days she's been living in a state of fear and nervousness. I don't know if she's afraid of the outside, of the other employee who lives in the house, farm tools, gravel, grass or a combination of all the sounds and smells of springtime in Vermont.  All I know is that she's taken to hiding in a bag of clothes, or in the bathroom cupboard which startles me every time. I squeal, she freaks out and goes to hide under the bed.


I'm pretty sure I broke the cat.
Posted by Cheesewench at 11:45 PM 1 comments

Dinner on a budget

The other night I was hungry. Hungry and broke. There was no ramen in the cupboard, no leftovers, and if I had to make one more round of scrambled eggs for dinner I was going to lose it. It was time for a plan. It was time to "play the six"*

Looking through the cupboard I saw some pasta, chicken stock and beans.  Awesome!  Rummaging through my brothers' side of the shelf in the fridge and I found some tasty looking sausage.  I went through my cheese box and uncovered a wedge of Orb Weaver cheese.  Awwww yeah.  That's when the sh#@ got real.

Orb Weaver is a delicious cheese that comes to us from Orb Weaver Farm in New Haven, VT.  Yes, the farm and resulting cheese take their name from the orb weaver spider *shudders*.  I don't want to write about spiders, so I'm going to lift this part straight from their website


...An orb weaver is a spider that makes delicate, symmertical webs.  For us, she is a metaphor for the cyclical rhythms of the farm, sowing, harvesting and enriching the soil to grow new pastures and gardens season after season.

And that's the last time I'm going to mention eight-legged creepy crawly creatures on my blog.

So what's the cheese like? Imagine if gouda and havarti got together and had a baby.  It has that kind of texture, soft and creamy with a nice open airy paste.  The flavors are milky, with a buttery sweet cream flavor, a hint of tanginess and just a tiny smidge of brown butter and hay.  So good.  She's also a great melting cheese.

Here's what you'll need for my poor man's resourceful pasta dish-this is going to feed two people really hungry people (with huge bowls full) with some leftovers for lunch the next day.

2/3# of pipette pasta.  I'm sure you can use penne, or any other grooved pasta shape.
1 can cannellini beans
1 onion-sliced thin (julienne)
2 cloves garlic-minced
two links of sausage (optional it if you're having an herbivore day)
16 oz. chicken (or veg stock)
salt and pepper to taste

Now, it would've been awesome if I had some kale, swiss chard or even spinach to add to this dish. Mmm...chard.  The next time I make it I'll be sure to have some greens in the crisper.
*I don't usually do this, but "playing the six" is a joke between me, my good-ish brother (not that brother**, the other one) and my sister-in-law.  I don't miss Chicago all that much, but I miss you guys.

**I've got two brothers.  Usually I identify them by calling one the "good" brother.  That wouldn't make sense to you, so I'll just say that the current good brother is the one who drove out to Chicago, and drove 20hrs non-stop back to VT, is letting me borrow his car, and let me stay in his room for 6 weeks until I found a job and place to live.
Posted by Cheesewench at 10:44 AM 0 comments

Every April I go to the cheese counter looking for new combinations of lactic goodness, searching for tasty answers to the question, "will it melt?"  This year I'm starting the month off with something a little sweet.

Usually grilled cheese is for lunch or dinner (or breakfast), but I wanted to try for a dessert-ish sandwich.  My inspiration was the New England classic, apple pie and cheddar cheese.  For those of you not familiar with this tasty treat, typically the cheese (white cheddar) is melted on top of the pie.  The pie is all warm and nummy and the cheese is just melty enough.  I wanted to see if I could do a recreation of that in sandwich form.

I'm not going to give you a recipe per se, but I'll tell you what ingredients I used.

I almost always have a hunk of cheddar in the fridge and for this sandwich I used Extra Sharp Cheddar from Cabot.  For cheese number two I went for Lake's Edge from Blue Ledge Farm in Vermont.*  This is a young mold-ripened cheese with ash and filled with tangy, creamy, salty, goaty goodness.  Usually I do a little shmear of this on toast with a bit of honey, so it seemed like a good idea for a grilled cheese.

For the spread I used jam from Elmore Roots Nursery.  They're a local VT business and have wonderful spreads.  Although all of the jams I've had from them have an apple base, for this sandwich I went for the super appley crabapple flavor.  The sweetness of the jam was a perfect pairing for sharp acidic cheddar and salty, citrusy, goat cheese.


It's a little bit sweet with a nice tanginess from the goat cheese. So good!  So how are you going to celebrate this month? 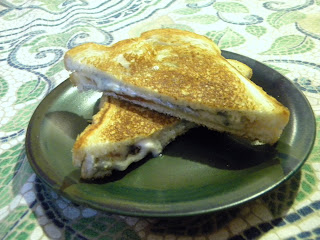 *If you don't have access to Blue Ledge Farms' cheese you can substitute Humbolt Fog.
Posted by Cheesewench at 12:23 PM 0 comments